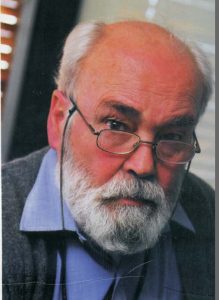 His relevant work in the training of human resources deserves to be highlighted, in which he has supervised 40 doctoral theses, numerous undergraduate theses; at least 15 of his former doctoral students are members of the CONICET Research Career.

He has performed in numerous scientific institutions, universities and societies scientists from the country and abroad, holding positions as President of the Argentine Geological Association (1979-1981), President of the IX Geological Congress Argentine (1981), Member of the Scientific Committee (1996-2000) and of the Board 2000-2004 of the International Geological Correlation Program of the International Union of Geological Sciences (IUGS-UNESCO) and Vice Dean of the Faculty of Exact Sciences of the University of Buenos Aires (1998-2006).

He obtained the “Storni 1975” Award and the “Pastore 1999” Award from the Argentine Geological Association; the “Houssay Prize 1987” from CONICET; the “Bernardo Houssay Award” for his Career in Earth, Water and Atmosphere Sciences (2003) from the Ministry of Science and Technology; the “Bunge y Born Prize” in Science (2009); Konex Platinum Award (2013) in Earth Sciences; the “Grandes Maestros de la UBA” (2011) and the  “Pellegrino Strobel Prize” (2015) of the University of Buenos Aires, and the “Ing. Enrique Hermitte 2019” from the Argentine Mining and Geological Survey. Abroad he has received the Mexico Prize in Sciences (2013); the Lenovo Science Prix (2017) from The World Academy of Sciences and the “Robert Mitchum Award” (2017) from the European Association of Geoscientists and Engineers. He was elected Honorary Fellow of the Geological Society of America (1993), being the first South American geologist to receive such distinction.

Dr. Ramos has published alone or in collaboration more than 200 scientific works and is also the editor of numerous specialized books, both locally and abroad.